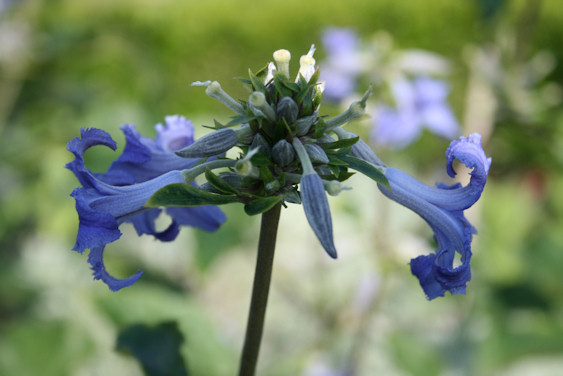 Clematis of the Month for July 2008

C. heracleifolia 'Cassandra' is a strongly scented herbaceous clematis that originated at the Staudengärtnerei Gräfin von Zeppelin nursery. The home of the Zeppelin nursery is the small village of Laufen. The nursery itself is set on a hillside with wonderful views. This nursery is famous to many people for its Peonies, Irises, Hostas and Poppies.

[Editor's note: The Society visited the Gräfin von Zeppelin nursery in 2001 as part of our short meeting in Basel, Switzerland.]

C. heracleifolia 'Cassandra' is very similar in appearance to the majority of heracleifolia-type clematis except that it grows slightly lower than most others in this group. 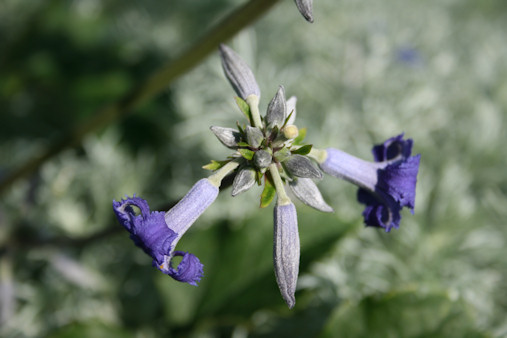 The flowers are small, mid- to deep-blue and hyacinth-shaped and appears in July, August and September. The flower diameter is 3-4 cm (1¼ to 1¾ inches). The leaves are quite large.

This clematis has a wonderful scent. It also seems to be easier to grow and keep than some other heracleifolia.

C. heracleifolia are often described as "herbaceous", meaning that they do not cling or climb. It means these clematis are very useful for the border, though not for a fence, trellis, etc.

It dies back to the ground, or partially depending on the winter, each year when its season is past and the weather turns cold. The plant is hardy in most countries.

The best place for C. heracleifolia 'Cassandra' in the garden is in a border. Give the plant enough room so that it can grow at will and it will become a beautiful plant.

After every winter you need to prune the plant so that the stems do not get too long. The stems are stiff enough to hold themselves erect to a height of about 1 meter (3 feet) and show the big, sturdy leaves. And you can even use it for cut flowers!

The easiest way to propagate is to divide a mature plant, by cutting through the entire root-mass in very early Spring, when the ground is workable but the plant is not yet in active growth. Propagating by cuttings is also possible but then you must resize the leaves. 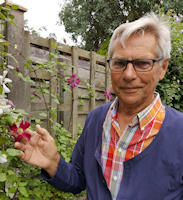 Ton Hannink with thanks to Nursery Böttcher of Belgium for the photos.