Clematis of the Month for May 2016 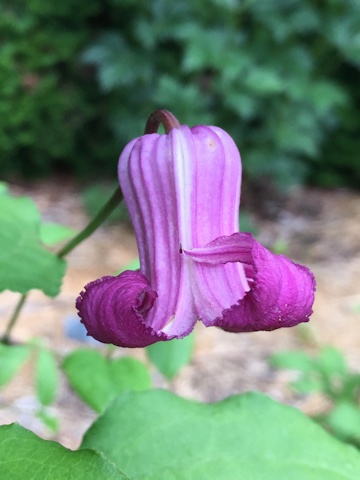 Crispa in the garden is still relatively obscure based on my observations here and abroad. Some of the reasons for that go beyond the big stumbling block that all viorna group clematis face. This obstacle is of course the retail nursery's inability to show the plant on a small trellis in bud or bloom during the peak periods when people are buying flowering plants.

Crispa for the collector, whether species or hybrid, is cherished for sometimes more compact plants, a dainty, easy-mingling habit and the delicate, sometime fragranced, small flowers, usually in pastel or blue tones. Crispa and related hybrids are often seen grown in a front of border spot, along a path, in a container or raised bed. While coveted by collectors, there are not many selections or hybrids that to my eye are real "show stoppers" in the garden.

Species C. crispa is endemic to the warmer zones of the Southeastern United States and was first documented in 1726. However, most of us that garden in zones 6, 5 and even 4 find the plants hardy. See Note 1

Like many plants in the viorna group, C. crispa did not find much of a niche in the USA until hybridizing began in Japan and the UK, even though the species is Native American. One of the earliest crispa hybrids on record was C. 'Blue Bells' bred by Luther Burbank in 1896 (C. crispa × C. texensis). Thinking about Mr. Burbank's selection of texensis as a pollen donor to crispa, one can surmise that his vision was a red crispa flower!

In the UK, the note worthy C. 'Burford Bell' was raised by John Treasure in 1991. Sometimes referred to as C. crispa 'Burford Bell', and sometimes as C. pitcheri 'Burford Bell'. The plant creates quite a presence in the garden with velvety royal purple bells on a very substantial plant.

Later, another outstanding selection with larger flowers, C. crispa 'Titipu' was raised in the UK in 2003 by Roy Nunn, from seed donated to the British Clematis Society. While there are not a plethora of hybrids with crispa in the background, the registrations include some remarkable plants from crosses with viorna, integrifolia, viticella and texensis. C. crispa has a good bit of variability in flower size, and the color range of species plants in addition to the more common pastel and blue tones mentioned above, does include solid color, medium dark pink. However, red crispa flowers have not yet been observed as a naturally occurring color in the species.

C. 'Princess Red' was a selection from seedlings of crispa made by Mikiyoshi Chikuma in 2005. Initially the plant was named C. 'Aka no Crispa' which translates to "red crispa", so we can speculate that the plant was raised toward this aim or recognized early on for the merits of the red flower. Interestingly, Mikiyoshi recalled in a communication to me, that the plant was re-named as C. 'Princess Red' by Szczepan Marczyński while he was visiting the nursery in 2008.

I remember my excitement about the description of a red crispa when I saw the listing from Joy Creek. The plant arrived and rather quickly established in a display container, and had a few flowers in no time. When the first flower opened I remember a fleeting disappointment in the coloring, that I have since heard others share on seeing the first blooms. They were a more muddy plum color, but the size of the flowers and the large crispa form was outstanding. However, the subsequent flowers that first season and going forward, show the outstanding color it is named for. I have grown several, and the plant, flower form, size and color are consistent and worthy of the regal designation it is marketed under.

The plant is tall enough to be mid or back of the border and can cover a tall support or mingle in shrubbery to great effect. Grasping and twining with leaf petioles, the plant reaches up to 3m (9 feet) in height by the second or third season in the garden.

On warm days, the 3 to 3.5cm (1½ to 1¾ inch) flowers may reveal a pleasant scent. Flowers consist of 4 red-toned sepals with pinker margins and upturned sepals and curled tips. On the outside, the sepals have delicate ribs. The stamens have golden anthers on white filaments.

C. 'Princess Red' flowers on this years' wood with one of the longest bloom periods of any clematis in my garden from May through October with some deadheading and light trimming through the season.

The leaves are 23 cm (9 ins.) long, 28 cm (11 ins.) wide and consist of 5-9 elliptic leaflets, each 14 cm (5½ ins.) long and 5 cm (2 ins.) wide. Early and late foliage may present with the reddish bronze nuances of stem and leaves that crispa plants are known for, adding even more interest in the garden.

When I think about C. 'Princess Red', I think about the achievement of the Chikumas in bringing to market such a vigorous, consistent plant with large flowers of classic crispa form in such beautiful tones of red. This plant should grace the garden of every collector of clematis. 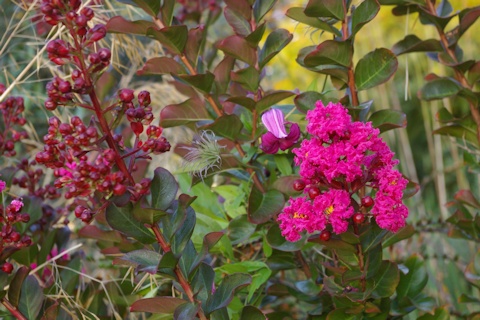 ©Maurice Horn - with thanks

Note 1: One of the speculative reasons for the hardiness of a species such as C. crispa found to be currently endemic only in warmer zones is the theory of glacial refugia. However, there is nothing published about clematis in regards to this and the literature concerning glacial refugia for many North American plants is lacking. I made an inquiry to Dr. Peter Zale to gain some additional insight into the conundrum of plants having hardiness beyond where the endemic area of distribution is currently documented. He pointed out that where a species is found today might not be the geography where it originated, with many factors possibly involved in the plant's migration, including the past movement of continents. 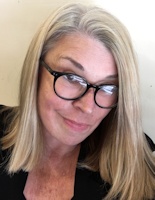 Return to top of page Return to Homepage