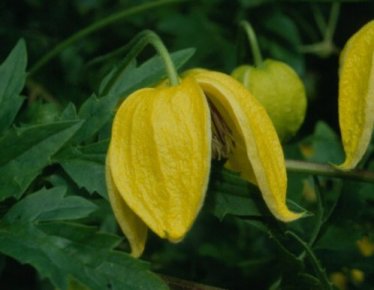 Clematis of the Month for October 1998

For decades it has been a treasured ambition of many hybridizers to create a truly yellow large-flowered clematis. None is known in nature, though two particular forms of the species C. patens -- one Chinese, the other Japanese, and neither of them known in the West until fairly recently -- are intense enough in their color to come close. It took many generations of careful selective breeding to give gardeners the choices they have today amongst large-flowered varieties that are almost yellow -- for example, 'Moonlight' and 'Wada's Primrose' and 'Guernsey Cream' and 'Lemon Chiffon,' and others besides -- with blossoms that open creamy- or greenish- yellow and soon fade to white. These are genuine beauties, and by no means all alike, but of course they are not quite the answer to the breeders' quest for an intense, long-lasting yellow.

What makes this so tantalizing is that the genus Clematis is rich in small-flowered species that cover themselves every summer or autumn with yellow bells -- a wide range of yellows, from pale to intense, from bright to dark, in many different shapes and textures. Unfortunately these species for the most part do not see fit to enter into fruitful relations with the race of large-flowered hybrids, though breeders of course continue to experiment. For the present, when we look for strong yellows in clematis, it is to these bell-bearing species and their cultivars, like our featured 'Bill MacKenzie,' that we turn.

C. 'Bill MacKenzie' is a big, vigorous vine, capable of growing to 25 feet or more if unheaded, but willing to flower well in half that space. Its growth is slow early in the season, but quickens toward bloomtime, which ordinarily begins by late June if the Spring has been warm. As with most clematis bells, the flowers have four tepals, in this case bright yellow, tough-textured and slightly glossy, and they gradually open out wide, displaying a thick contrasting boss of dark stamens. Not long after the first wave of blossoms, seedheads begin to form, and, as with other long-flowering summer species like C. tangutica and C. songarica, the later crop of flowers is wonderfully set off by those balls of silver that gleam in the sun. If the plant is to be cut back hard, the best time would ordinarily be when the flowers have gone by, in winter or early Spring.

The original 'Bill MacKenzie' was found as a seedling by a former Curator of the Chelsea Physic Garden in London, and bears his name. Its parentage has been debated by experts; in lists it has appeared under both orientalis and tangutica. According to current practice it should be offered simply as 'Bill MacKenzie.' One caution: early in its career the plant was so popular that one or more growers who should have known better put out seedlings of it as the genuine article. These and their possible offspring have probably disappeared by now, but gardeners who set great store on authenticity may wish to buy their plant from a knowledgeable source.

Editors Note:- Brewster tells me he's been in communication with Vicki Matthews and she has established, on the basis of obituaries of MacKenzie and a letter from his daughter, that the correct spelling is with a capital 'K', i.e. MacKenzie. She'll record it that way in the Register. Many thanks to them both for clearing this one up.