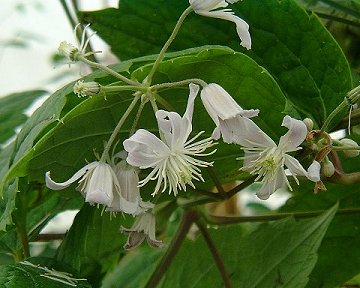 Clematis of the Month for October 2000

Looking for C. 'Mrs. Robert Brydon' in books and nursery lists is something of an adventure. Owing to confusions about its parentage and even the spelling of its name, it lives a sort of Russian-roulette existence in the garden alphabet, popping up sometimes under H for heracleifolia, or D for Davidiana, J for x jouiniana, T for tubulosa, M for Mrs. (or indeed Mr.), or R for Robert, depending on whatever authority the writers are following. Luckily we will soon have the authority of the International Clematis Register to assure us that 'Mrs. Robert Brydon' belongs under M.

As the clutch of names above suggests, this is one of the non-vining or "bush" clematis, relatively slow-growing early in the season, but capable of spurting suddenly after midsummer and sending branches out 6' to 8' (1.75m-2.5m) or even more, with clusters of small white-and-blue or white-and-lavender flowers developing in late summer at the tips and upper axils. The plant has big gestures for its size, with coarse, bright-green leaves on relatively long stems, and gardeners in tight quarters might want to tie it to supports before it starts asserting itself. But if left to cavort on its own all that foliage can turn into an imposing billowy groundcover, and against such a background the flowers are brightly visible. As with many of the other shrubby clematis, the flowers owe their sparkle not to size or brilliant colour, but to the prominence of the stamens, which radiate out in all directions and seem to buzz with energy. They remain in place when the curly tepals are gone, but finally sprinkle down on the leaves, still faintly suggesting the appearance of bloom. And when both flowers and foliage are done for the year, the plant can be cut to earth. 'Mrs. Robert' will usually attend to most of that by itself, being woody only at the base, or quite herbaceous in cold climates.

We owe the plant to chance. A spontaneous hybrid that volunteered in the garden of Mrs. Elizabeth Prentiss of Cleveland, Ohio sometime in the 1930s, it was brought along by her gardener Robert Brydon, and named after his wife when it achieved printed notice in 1939, in the U.S. magazine Horticulture. For some years it went almost unregarded, until the national mail-order house known as Wayside Gardens introduced it in the 70's as a C. jouiniana cultivar, ostensibly of their own raising. It did not stay long in the Wayside catalogue, but was taken up by others on both sides of the Atlantic, and seems now to be established in various lists (though, as we said, not always in a predictable location).

It has to be admitted that 'Mrs. Robert'—the botanical one—has had rather a bad press from some good judges. Not to recount some brief negative reports in passing, let it suffice that after two or three jabs at what he regarded as its inferior coloration, the inimitable Christopher Lloyd exploded with, "If I haven't sufficiently damned with faint praise let me add, unequivocally, that it is a poor thing." [Clematis, any edition.] One does not lightly take issue with Mr. Lloyd, but the description of the flower elsewhere in his book does not match the plant as it is known in the U.S., where the flower is distinctly white with sky-blue margins—a delightfully frosty look on a hot day. Is it possible that the version grown in Britain is a different clone? Has a seedling intervened? It seems worth investigating. For this is a clematis that really should not be sent packing with a bad report card.

A word in closing for those interested in the terminology that has wobbled so much in the past: in the first place the relationship among the terms heracleifolia, tubulosa, and davidiana has been unstable for years, though it appears now that a consensus is emerging. In the second place, it hasn't always been clearly understood that, whichever of these three terms was used to identify one parent of C. x jouiniana, the other parent was C. vitalba. According to the very best botanical judgment that can be brought to bear on the case, the spontaneous cross that produced 'Mrs. Robert Brydon' did not involve either C. vitalba or C. x jouiniana, but another species entirely, the American climber known as C. virginiana. So how does all this add up? Despite its currency, the description of 'Mrs. R.B.' as descended from C. x jouiniana is incorrect. The derivation, as spelled out by both Magnus Johnson and C. Grey­Wilson (and just verified with Victoria Matthews, editor of the forthcoming Register), reads: C. tubulosa x C. virginiana. But for those of us who specialise in nursery lists and not taxonomy, it is pleasant to note that the correct name of the cultivar is simply 'Mrs. Robert Brydon'—as displayed at the top of the screen.

[Editor's note: May 2012 and I've updated this page with the photo below, from Richard and Mahala Huff and taken in their garden in August 2010. One of the most spectacular examples of 'Mrs. Robert Brydon'that I think I've come across, I wonder whether it now completely covers the trellis?] 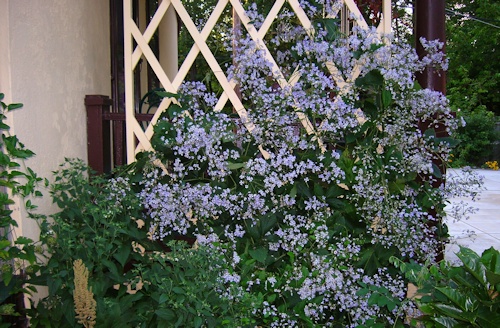