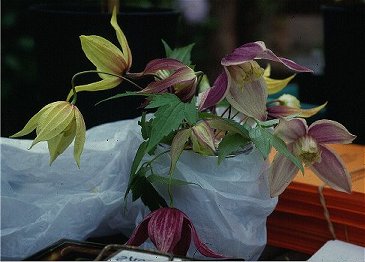 Clematis of the Month for March 2001

About two years ago in this spot we featured an early Spring clematis called 'Columella,' one of the many Atragene hybrids produced by Magnus Johnson at his nursery in Sweden. We remarked then that most gardeners in other parts of the world are barely starting to reap the benefits of his years of work, not only with such established favourites as C. alpina and C. macropetala, but less familiar relatives like C. koreana and C. fauriei and C. ochotensis. Some of his named hybrids have been finding their way into the higher echelons of the trade; more will follow. And in the mean time other hybridists are eagerly carrying the work along, raising new generations of seedlings, combining and re-combining, and searching the results for openings into something new. Most of the offspring, they know, will not be singular enough to send to market, but there is always the chance that some one seedling in the batch will be a leap forward...or sidewise.

The photograph above shows the process in action. Its subject is a little exhibit brought to a 1991 meeting of the British Clematis Society by the late Vince Denny—two of his Atragene seedlings in flower. Both are of mixed heritage. The one on the right appears descended from one of Magnus Johnson's F2 hybrids, though which one is not easy to say; it is responsible for the foliage in the picture. The one on the left is close to our featured species, the Korean C. chiisanensis. Both have the bundle of petaloid staminodes at the center of the blossom that marks them as Atragenes. They also have the typical shepherd's crook above the blossom, though being obliged to stand at attention in their vase, they do not nod as they would on the vine.

The species we call C. chiisanensis Nakai is native to South Korea and the nearby island of Cheju. Its name comes from Chiri-san (formerly written Chiisan), the second tallest mountain in Korea. Like the other Atragenes it is a deciduous vine that would just as soon ramble as climb. If trained straight up it can reach a height of 12'-15' (3.5m - 4.5m); if it runs out of support, it will spread out irregularly, propping itself on its lower branches. In either case it is easy to trim at need, though gardeners may want to know that unlike most of the alpinas and macropetalas, which flower admirably in early Spring but have little or no bloom later in the year, this species is given to small flushes of recurrent bloom. As a consequence, though it can be tidied up after the main crop in the Spring (later than the alpinas), it may be best to leave any deeper pruning to the winter weather, and enjoy whatever midseason bloom comes along. 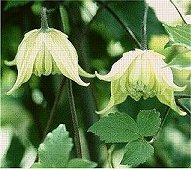 The leaf consists of three leaflets of a fresh green, slightly toothed and usually less narrow and pointed than those in the top photograph. The flower is more variable. It can range from its typical yellow to white or green—or even an eerie gray-green, which may not be beautiful but is certainly arresting. It can be chunky, as in this specimen (left), with the staminodes adding great fulness to a blossom no more than about .5" (4cm) long; or the staminodes can be all but missing and the flower correspondingly slim. Usually there will be reddish speckles, though in plants from seed that Tomas Lagerström brought to Sweden from a 1976 expedition to Korea, the yellow tepals were an immaculate light yellow. Not only that, but in some plants the flowers may be without one of the most interesting properties of the species: a set of crisp-looking spines at the base of the bell (which is to say the top, in a nodding blossom).

Since neither of our pictures happens to display this attractive feature, here is a third (right), showing such spines on a blossom of a closely related species, C. koreana. At one time the presence of those spines gave rise to a special name, C. chiisanensis var. carunculosa, but taxonomists have now reduced the extra name to a synonym, and its appearance in lists may or may not be evidence that the form offered is the spiny one.

The good performance of this species in the cold climate of Sweden has prompted a wider introduction of some good named selections, notably C. chiisanensis 'Love Child,' available in Europe, and 'Lemon Bells,' an impressive recent release from the University of British Columbia. Both have substantial nodding bells of bright yellow with a reddish base, and seem trouble-free. And both have the cachet, for some gardeners, of direct descent from the species.