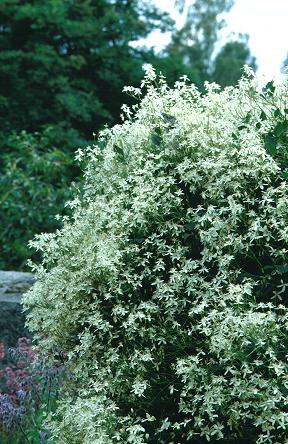 Clematis of the Month for November 2003

with photos by Jan Lindmark

Clematis recta belongs to a section of the genus best known for tall, shrubby climbers like C. terniflora and C. flammula that bear great clusters of small, fragrant, starlike blossoms in late summer or autumn. It shares the bounteous nature of these larger relatives, but differs from them in two important ways: it is herbaceous, and it does not climb. Each year it forms a new free-standing clump that may top out at less than four to more than six feet (1-2m), depending on the familiar variables that affect individual plantings, and is usually ready to produce its panicles of white flowers by midsummer.

In the forms most often seen the flowers are small, rarely more than an inch across. They gain their full visual weight only when the stamens shed their pollen and are free to spread out. Many of the shrubby species of clematis have this kind of flower, in which the "buzz" created by the stamens at their center is a major factor in their charm. The sepals (in C. recta, most often four, but occasionally five or even six) are clearly separated, never overlapping, so that they give the blossom a starlike appearance even at a considerable distance. Though the clusters form high up on the individual stems, a plant of C. recta in full bloom may seem to be covered from top to bottom, or nearly so, because of one habit that has produced the same joke over and over again from gardeners—and plaints from the ones it takes by surprise. Years ago Christopher Lloyd made the point for us, commenting that C. recta (or C. erecta as it has also been called) could hardly have a sillier name. For as we know it in cultivation it is anything but erect. It will usually get topheavy as it approaches full height, and by the time it is in bloom may be prone on the ground or at the foot of its neighbours. This need not be a bad thing if one plans for it, because stems heavy with recta blossoms can be a highly decorative groundcover, but perhaps most of its patrons would rather keep it standing tall, and for that it must have some staking or some discreet wedging between other plants. 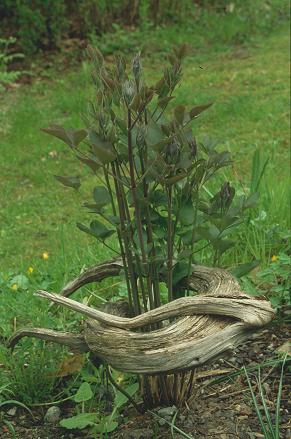 Its flowers are not its only virtue. The foliage is well-presented, with uniformly green or bluish-green leaves composed of five or seven long-stemmed leaflets that hold their colour well until late in the year. Some gardeners choose to bypass the standard offerings, however, in search of a variant known as the "Purple-Leaf" form, which for many years has been offered by different sources under different names, and so has a slightly wavering identity in the trade. The Clematis Register cites five distinct cultivars with the name 'Purpurea.' The special attraction of this form, in whatever incarnation, is obviously that the stems and leaves should be purple, and in the most successful cultivars they are, at least when the foliage is new. The talking point for these plants is that the foliage should not just be purple, but that it should stay purple and not turn green, and that is a point somewhat difficult to reach. For example, the fine cultivar offered as 'Lime Close' (SERIOUS BLACK™ in the States) has exemplary purple leaves in its young growth, and after bloom when new foliage begins to appear it is a delicate purple again, but a time comes in between when—oh, horrors!—it reverts to its ancestral green. Still, be it said, only the purest of purists would want to disqualify it on such grounds, and luckily it is getting established in the trade. The purple-leaf specimen shown here in Jan Lindmark's photograph is not a named cultivar but simply an anonymous seedling, playfully served by a knot of bygone Juniper he found on a hillside near his home. He comments that he is unaware of any steady source for named cultivars of the 'Purpurea' persuasion in Sweden, and that is likely to be the case almost worldwide. For this and many other desirable but less-publicized species, as hobbyists have long known, the only viable source may be seed. 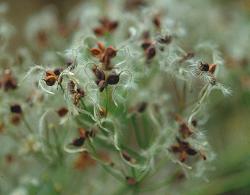 Speaking of seed, the ornamental possibilities of C. recta do not end with its flowers, but carry on to the fruit. For the most part when the subject turns to seedheads, we are probably conditioned to think of the ones borne by the Atragenes and the Spring-flowering hybrids, those eye-catching balls that change colour from green or gold to gray and white as the winter comes on, hiding the individual seeds as if they were in a cocoon until very late in the process. With C. recta and some others of the late species, the look is very different. The seed are not swathed for long in a ball of fur; they are often large, and stand out individually, almost formidably, as if they would like to say "We mean business." And of course they do. The success rate for C. recta seed is very good.

That is fortunate, since except for specialist nurseries there is scant representation of C. recta in the trade. A pity, because this is an appealing species, easy to start, easy to grow, reduced to a small armful of trash when it's finished for the year, and—once a choice has been made as to how (or whether) to support it next year—worry-free.